In our so-called all powerful male supremacist society, men consist of over the half of viewers when it comes to women's soccer, specially considering the FIFA Women's World Cup. These stats come directly from FIFA's Women World Cup Germany 2011 report: 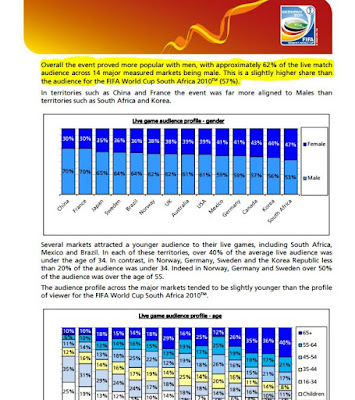 In continents and regions considered highly oppressive towards women by western feminist academics, like Africa and the Middle East women's soccer had most viewers despite them having less economic resources compared to first world nations: 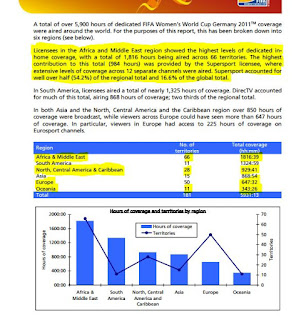 And the report also revealed that most viewers came from middle and upper classes... you know... the patriarchs with power and wealth oppressing women... 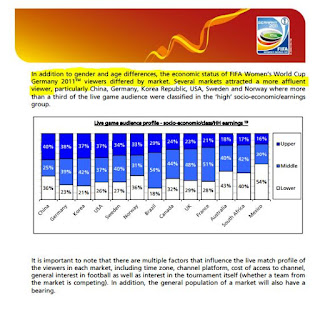 When complaining why female sports don't receive equal attention compared to male sports. feminist should ask women, not men, why of the disparity since women are shown to prefer male oriented sports. Here's Forbes reporting on women's preferences when it comes to gender related sports, they also reveal that men tend to be most of the viewers when it comes to other female sports categories:

'What sports do women watch on T.V.?  Yes, Abby Wambach in the women’s World Cup and Serena Williams in the women’s final at the U.S. Open were popular picks this year. But soccer and tennis still pale next to football, basketball, baseball and yes, Nascar. (men’s versions all, save for the occasional female race car driver).

Females account for more than a third of 14 million-plus people that tune into major events like the NBA Finals, World Series, Daytona 500, and Stanley Cup Finals, according to data from Nielsen.  And as for the granddaddy sporting event of the year, the Super Bowl, the 2011 figure jumps to 45.9% of the game’s 111 million viewers, or some 50 million women cheering on the Steelers or Packers.

The NFL shop online puts out an entire line of female-targeted merchandise for every team.  Maybe it’s time to lay the term “football widow” to rest.

“I don’t think people realize how big a percentage is women,” says Stephen Master, a Nielsen Vice President. And it’s not all that new of a trend – Master notes that women have been a big part of the viewing audience for the better part of the last decade, at least for the major events.

Meantime, 5.2 million women tuned into the Women’s World Cup final between Japan and the U.S.  (compared to 8.3 million men), making it the fifth-most viewed sporting event among females. The U.S. quarterfinal match against Brazil also squeezes onto the top ten list, just head of both the men’s and women’s Wimbledon finals, with 1.2 million female viewers (again, there were many more male viewers).

The quarterfinal  actually outdrew the U.S. soccer team’s semifinal match against France one round later, which shows the attraction of a powerful opponent.  Women’s soccer, though, proved no different than men’s baseball, hockey or hoops – all rely on a solid female audience of 30% or so to complement a viewership that’s predominantly male. Even the recent U.S. Open Women’s final , won by Samantha Stosur overSerena Williams, had slightly more male viewers (2.7 million) than female (2.4 million).


Posted by Objectivist Seeker at 9:27 AM