Women in Colonial America were the first to Own Printing Presses.

Unlike the humongous myths you have heard or been told by feminists, when it comes to women having basic rights as men did; like having the right to education and running businesses, during the colonial days of the US, women were pioneering in journalism and advertisements.

In"Encyclopedia of Women in American History", we discover that the first person to even own a printing press was a woman named Elizabeth Glover of Cambridge MA, in 1638, and 25 women who ran newspapers and presses, plus other additional 26 cases; including where a woman opened up her own firm with her own money. Do these women sound oppressed to you? 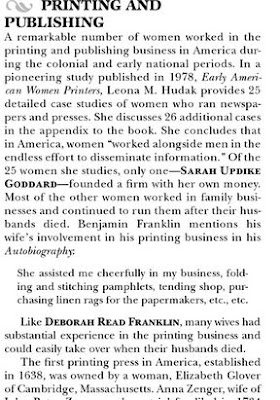 When we read further down, we also find out that a woman named Mary Katherine Goddard was chosen to be the first one to even print out the first copy of the Declaration of Independence, and that publications respected both male and female audiences; even not wanting to offend women who would read those articles. Sounds like typical chauvinism in action to me: 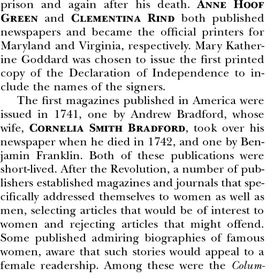 These just helps demonstrate some of the massive lies your government, teachers and the mainstream media have told you regarding women's level of freedom in early America.
Posted by Objectivist Seeker at 12:02 PM